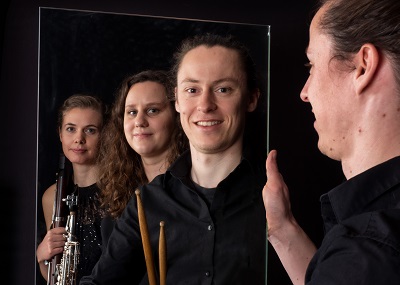 Mervyn Groot, born 1989, got his Master degree Classical Percussion at the Conservatory of Amsterdam, the Netherlands, in 2013. He did a second Master at the HfMDK in Frankfurt am Main, Germany, in the direction of Contemporary Music in 2015. In September 2017 he started his doctoral study, Artist Diploma, with his project Body Tales at the CNSMD in Lyon, France.

Mervyn Groot is member of Trio Nebula and TenToon Ensemble in the Netherlands and Ensemble Tempus Konnex in Leipzig, Germany. He has attended several academies a.o. Ligeti Academy, International Ensemble Modern Academy and Atlas Ensemble. Mervyn participated in projects of the ASKO|Schönberg Ensemble, Ensemble Modern, Slagwerk den Haag and the Orchestra of the 18th Century.

He has won prices with his ensembles at the Karlsruher Wettbewerb für Interpretation zeitgenössischer Musik, Germany, and the 'On Wings' competition for winds and percussion in Groningen, the Netherlands.

During his studies in Amsterdam Mervyn started developing sound installations. The foundation of those installations are acoustic percussion instruments and objects which can be used as a percussive sound source, such as wooden blocks, metal tubes, pvc pipes or strings. With compositions and the use of electronics these installations come alive.

In the spring of 2016 Mervyn was invited to do a residency at the famous Bauhaus in Dessau, Germany, and to perform three concerts for the Kurt Weill Fest 2016.